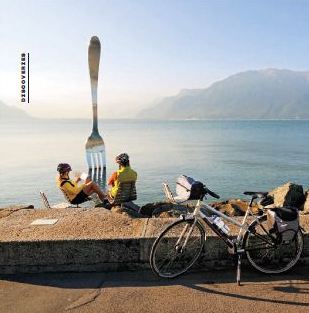 It’s easier than you think. The meandering roads of the Swiss Lakes Route offer cyclists of all levels the chance to experience the country’s quieter,more bucolic side. BY MOLLY HARRIS

“YOU CAN NEVER GET LOST,” my guide, Ruedi, reassured me. I was about to set off along Switzerland’s Lakes Route, which meanders from Lake Geneva all the way to Germany. His maxim would repeat in my head throughout my trip—usually just after I realized I’d taken awrong turn. But he was right: in a country so beautiful, a detour now and then isn’t so bad. Switzerland has long been a destination for serious cyclists, but the abundant train connections (and now the option of e-bikes) make it possible even for beginners. A tour operator such as Eurotrek (eurotrek.ch; four-day trips from $529) can set you up with gear, maps, and on-the-ground assistance. Contact T+L A-List travel advisor Bob Preston (bob@globebleu.com) for help planning a comprehensive Swiss itinerary that includes a bike trip.

DAY ONE After picking up the bike in Villeneuve, I pedaled off toward Château de Chillon (chillon.ch), a castle on the shore of Lake Geneva. From a window in one of the turrets, I took in the aquamarine waters of the lake and the snow-dusted peaks of the Alps in the distance. From there it was on to Montreux, where live music spills into the streets during the town’s annual Jazz Festival (June 28–July 13; montreuxjazzfestival.com). I stopped for a coffee and some music, then began the winding ascent through the hills to Vevey, where Charlie Chaplin retired. The Modern Times Hotel (modern times hotel.ch; doubles from $236) pays homage to the Little Tramp with its black and whitedécor and film stills on the wall, while Chaplin’s World (chaplinsworld.com), a museum built in the actor’s former home, delves deep into his life and work.

DAY TWO Before leaving Vevey, I coasted down the steep streets to catch the funicular to Mont Pèlerin, where dramatic views of the Lavaux vineyards were just the inspiration I needed to get back in the saddle. After a morning spent biking through meadows where dairy cows grazed lazily, I spotted the steeply pitched roofs and turrets of the village of Bulle. At La Cabriolle(la-cabriolle-restaurant.com; entrées $16–$20), I ordered soupe de chalet. The cheesy mélange of potatoes, Emmentaler, and pasta was just what I needed to fortify myself for the hills ahead. I dipped my water bottle into the square’s