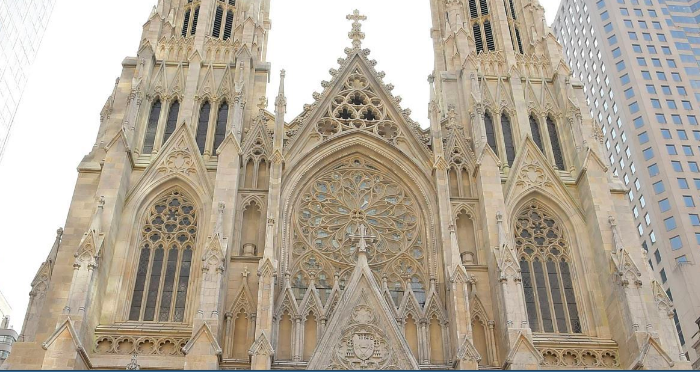 New York City is home to many architectural wonders and iconic buildings, but near the top of any sight-seeing list for history buffs, spiritualists, or architectural junkies should be this tour.  Today we’re featuring three of the most beautiful historic churches in New York City – absolutely stunning testaments to faith: the Cathedral of St. John, St. Patrick’s Cathedral, and St. Paul’s Chapel.

Officially known as the Cathedral Church of Saint John: The Great Divine in the City and Diocese of New York, the Cathedral of Saint John the Divine is also nicknamed Saint John the Unfinished. Due to abeyances caused by two World Wars, and a large fire in 2001, the cathedral remains under construction over a century later. Despite its incompletion, the Cathedral of Saint John the Divine holds the contentious record of being the largest Anglican church and cathedral in the world. Building began in 1892, the cathedral is designed in both the architectural styles of Byzantine-Romanesque and Gothic Revival. It is made of stone, granite, and limestone. Its granite columns are proclaimed to be the largest in the world! Given its size and acoustic quality, the cathedral is also a major venue for theatre and live musical performances. Jazz great Duke Ellington is among those who have performed there. And, Reverend Dr. Martin Luther King gave a talk there in the 1950s. The history and artwork alone, both inside and outside the cathedral, are worth the visit.

A towering testament to the Catholic faith soars 330 feet above the busy streets and stands in stark contracts to the famed boutiques and modernity of Midtown Manhattan. Since its opening in 1879, the neo-Gothic cathedral has been the center of New York’s Roman Catholic Archdiocese and an important place of reverance for the city’s Catholic worshippers. While it is a huge tourist attraction, this U.S. Historical Landmark is still an operating parish which performs baptisms, confessions, and mass for any who enter its doors.  In addition to the exquisitely crafted Rose Window and altar, the Lady Chapel, added in 1901, is a must see.  By appointment, visitors can view the onsite crypt in which the former archbishops of New York are buried. It is important to note that the cathedral is undergoing major restorative renovations, both inside and out, which will prevent visitors from viewing all of its details and splendor.

The oldest standing church in Manhattan, this U.S. National Historic Landmark dates back to 1776. Unlike many of the tourist hotspots around the city, St. Paul’s is rich in colonial history. This Georgian Classic-Revival style building is worth a visit before or after a trip to the 9/11 Memorial. A monument to Brigadier General Richard Montgomery stands affixed the east window of the chapel as a tribute to his contribution to America’s fight for independence. Additional noteworthy artifacts include George Washington’s original pew and sculpture both created by Pierre L’Enfant, famed architect of our nation’s capital, Washington D.C. Founding Father and president, George Washington attended worship services in this Episcopal church during the two years that New York served as the newborn country’s capital. The building has miraculously survived both the Great New York City Fire of 1776 and the 9/11 attacks, when building around it crumbled. It soon became a place of refuge and worship for the rescue workers. It soon became makeshift memorial to those who perished in the attacks and remains a place of remembrance.

REQUEST THIS GUIDED TOUR WITH ONE OF OUR KNOWLEDGABLE GLOBE BLEU CONCIERGES TODAY!   CLICK HERE TO REQUEST THIS TRIP.